It’s always the way, which do you concentrate on first or do you do them together, is there one that is more important to you initially? To make it fun or to sit and teach? Too many questions? I thought so too.

Here at pocketnannies we believe in the fun way! This matching letters or numbers activity is such a hit with my charge that I’ve just kept adding to it resulting in a multi dimensional, sensory, letter and number recognition game and maths skills task that I’m pretty proud of to say the least!

It has taken me a little time to build it up to what I have got to now but that has involved a lot of my OCD-measuring to the mm to make sure each card was the same size, precision colouring in and careful laminating. Please, just have fun making and doing it, you don’t have to be as precise as me.

Initially you need (to do the whole alphabet and numbers 1-20):

Letter (big and small together eg. Aa) 26 envelopes and number 20 envelopes on the back of the envelope normally where it would close. I used a repeating colour pattern to do this (you’ll see why later). Then write the alphabet (big and small) and numbers on the lollipop sticks, also using a similar repeated colour pattern.
Stick your letters or numbers up in your large space so that the envelopes look open. Like this: 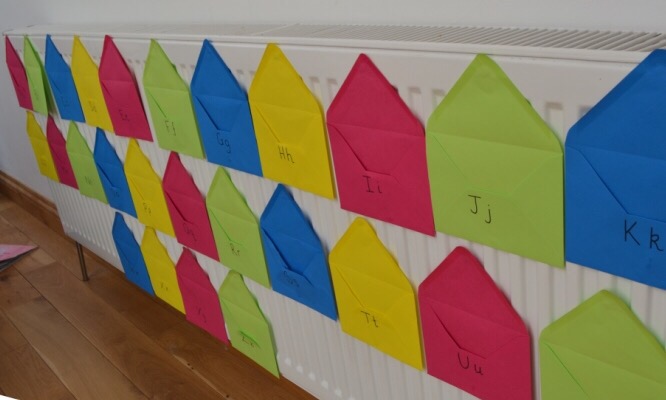 Let your little one choose a lollipop stick, tell them the sound or number that is presented to you and get them to at least attempt to repeat it back to you. Then ask your child to put it in the matching envelope. *TIP* to begin with stand your little one in front of the block of letters/numbers that the one you are looking for is in. I found my charge was a bit overwhelmed with so many envelopes to begin with that he didn’t really know where to start looking.

Things to talk about/bare in mind when doing this activity

Looking for something in particular..

What we’ve been tweeting about

(Gifted) She’s probably dreaming of breakfast already... 💭 We were sent these @babyledfood_ spreads to try a while back. And now this little one is exploring ALL the food we thought it was about time we tested them out. The ‘tangy blueberry’ spread was a hit with Matilda this morning. Babyled spreads are great for on toast, dipping, stirring into pasta.. all sorts! And now they have a fab new range of cooking pastes & sauces. Including Satay Sauce, Thai Green Curry & Moroccan Tagine ~ very handy for a quick and tasty supper.